Please Note: All product images used may be of a prototype, a real image of the product to be replicated or an illustrative example and may differ from the final deliverable product.

THE MONARO – AN AUSSIE ICON…

Redefining the Australian motorist’s perspective on performance cars, the Monaro exploded on to the scene in 1968. Over the next decade, Holden released some of Australia’s most iconic Monaro models, before the name was phased out in 1977. Roaring back into Australia’s motoring lexicon in the early 90s, after a hiatus of almost 25 years, the Monaro remains deeply engrained within Australia’s cultural identity.

A glorious tribute to this much loved Aussie icon, the collection comprises nine genuine Australian pennies issued during the reign of King George VI. Finished in pure 99.9% gold, each penny features a full-colour design of one of Holden’s classic Monaros. United within a case with by a numbered Certificate of Authenticity, the 9-coin set is a strictly limited edition. 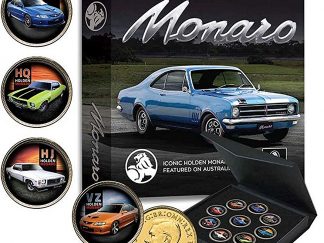