Fabian Coulthard’s arrival at DJR Team Penske in 2016 was eventful as the fast Kiwi driver came to grips with the FGX Falcon package after spending a number of years previously in the Holden Commodore. There were some encouraging results, notably a pole at the season opening Adelaide 500 and podiums at Phillip Island and Winton all the while the team implemented a ‘rolling sponsorship’ system where the major backer and livery/colours of the cars would change on a round-by-round basis across the year.

Paired with stalwart Luke Youlden for the endurance races, Coulthard’s 2016 Gold Coast 600 race will no doubt be best remembered for a spectacular crash involving HRT’s Garth Tander. In a battle for position, Coulthard led Tander out of the last turn and accelerated up to 265kmph where the duelling drivers eventually tangled after an obvious error from Tander saw the front of his Commodore nudge the left hand rear corner of Coulthard’s Falcon, sending Coulthard into the concrete wall at high speed, absolutely wrecking the car. The car couldn’t have been closer to being labeled a write-off however an absolutely monumental effort by everyone at DJR Team Penske got the car repaired and on the grid for the Sunday race. Tander later said he deeply regretted the move. 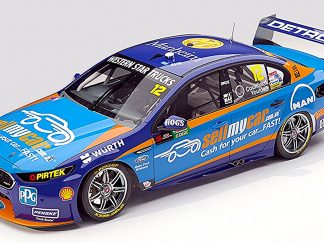