Fabian Coulthard’s arrival at DJR Team Penske in 2016 was eventful as the fast Kiwi driver came to grips with the FGX Falcon package after spending a number of years previously in the Holden Commodore. There were some encouraging results, notably a pole at the season opening Adelaide 500 and podiums at Phillip Island and Winton all the while the team implemented a ‘rolling sponsorship’ system where the major backer and livery/colours of the cars would change on a round-by-round basis across the year.

Coulthard’s 2016 Darwin Triple Crown weekend started off reasonably well with his #12 Falcon featuring a Taubmans livery for the weekend. A 6th place finish on Saturday saw him sitting nicely in the top 10, however come Sunday, Coulthard’s luck had disappeared. A racing incident between James Moffat, Chaz Mostert and Coulthard saw the trio attempting to run three-wide before Moffat and Coulthard made contact. Coulthard spun and collected Mostert, who had taken to the grass to try to avoid contact, with both hitting the outside wall. Mostert’s car continued on the grass and went across the circuit at Turn 5 while Coulthard’s car bounced back onto the track on the exit of Turn 4, ultimately ending his day with significant damage to the front of the car. 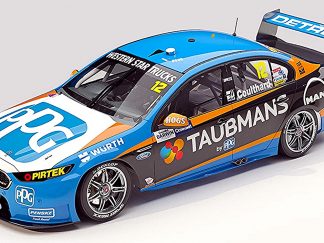