Erebus Motorsport Holden ZB Commodore driven by Anton DePasquale and Will Brown at the 2018 Rabble.Club Sandown 500 Retro Round.

Featuring an amazing retro themed colour scheme based on the car used to take Graeme Bailey to a Class B win behind the wheel of a Toyota Celica at Sandown in 1982, this car simply looked fantastic and is a perfect example of a retro livery done right.

As part of the launch for this car and the #9 team mate car of Reynolds/Youlden which payed tribute to his 1986 Bathurst Winning Chickadee VK Commodore in another retro livery, Graeme Bailey was on hand and described the liveries as an honour.

The Erebus ZB Commodore looked magnificent and it performed reasonably well on race day too, ultimately finishing just outside the top 10 in 12th place for the race. 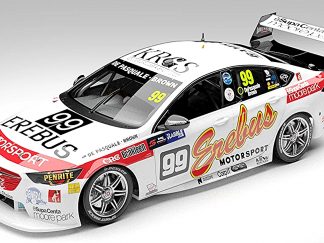