Ian ‘Pete’ Geoghegan’s victory in the 1968 Australian Touring Car Championship marked the end of an era given it was the last time in history that the title of Australian Touring Car Champion was decided by a single race, rather than a series of races. The victory also gave Geoghegan his third consecutive ATCC crown, having won the 1966 title at Bathurst and the 1967 championship at Lakeside, his first in the Ford Mustang that ultimately took him to three title wins in a row covering ’67, ’68 and 1969. The 1968 ATCC was decided by a single 34 lap race around the Warwick Farm circuit in Sydney on September 8, 1968 and Geoghegan established himself as the man to beat by setting pole position, his 1m42.8s lap six-tenths faster than the Chevrolet Camaro of 1965 champion Norm Beechey.

The duo was joined on the front row of the unique three-wide front row of the grid by Bob Jane’s Mustang with a total of seven Mustangs in the 30-car field. But there was only one Mustang to beat and that was Geoghegan’s. He bolted straight into the lead at the start with his rivals unable to slow him down. Jane’s engine ended up going on lap nine and three laps later Beechey coasted to a halt, also with engine issues.
That left Geoghegan unchallenged and he went on his way, his trouble-free race taking him to his fourth Australian Touring Car Championship victory.

At the end of the 123-kilometre race he crossed the line 1m31-seconds in front of the Morris Cooper S of local New South Wales driver Darrell King with the Porsche 911S of Alan Hamilton the only other car on the lead lap in third place. Geoghegan had led all 34 of the laps in the race and set the fastest lap of 1m43.0s, setting a pace good enough to win but with plenty in reserve had he been challenged. Proof of that came in a support race later in the day where he broke Beechey’s touring car lap record and set a 1m40.7s lap! Geoghegan would go on to win the 1969 championship – again at the wheel of the same Mustang that he’d taken to victory in 1967 and 1968 – and became the first five-time Australian Touring Car Champion in history in doing so.
He was inducted into the Supercars Hall of Fame in 1999 and passed away in November 2003. 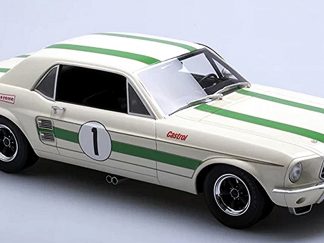