The Holden Racing Team without doubt holds a special place in the heart of many red-blooded Australian motorsport fans.
From 1989 to 2016, HRT raced a variety of famous Commodores across Australia and on occasion, internationally. With the iconic Holden lion and helmet motif ever evolving and sprawling down the sides of their cars, they were the all conquering, unmistakable Holden factory team for a long time and boast a storied history.
Part of that history includes the time the team, along with the entire V8 Supercars category, visited the United States of America to hold their first (and only) championship round in the country at the Circuit of the Americas in Texas for the Austin 400.
To celebrate the milestone round in the USA, HRT updated their #2 and #22 VF Commodores driven by Garth Tander and James Courtney to feature an ‘Aussie-Made’ livery which incorporated the Australian flag on both the roof and rear quarter panels of both cars which combined perfectly with their striking season livery.
The team was there to ‘fly the flag’ for Australia and show America the power of the then new VF Commodore which would soon be exported to the USA. Holden’s VF Commodore in fact dominated the Austin 400, winning all four races across the round.
The HRT cars weren’t on the winners sheet that weekend, however, this livery certainly looked like a winner and we’re excited to finally be replicating these cars in scale model form.
Both the #2 and #22 models will be produced in high quality sealed body die-cast with clear windows, detailed interiors and will be presented in a clear acrylic display case featuring presentation finishing in an exclusive limited edition with an individually numbered graphic base. 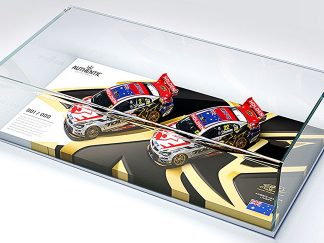