THE most successful team in the history of the Virgin Australia Supercars Championship underwent a transformation for the 2018 season with some heavy-hitting names in world motorsport joining the Walkinshaw family in creating Walkinshaw Andretti United.Ryan Walkinshaw’s connection with Andretti Autosport and United Autosports brought together organisations with rich histories of success in a variety of motorsport categories, making for an exciting new chapter in the team’s history as it rolled out of a pair of new shape ZB Commodores for the new season.

Once known as the Holden Racing Team, the team – now under the Mobil 1 Boost Mobile Racing banner – rolled out for its debut event at the season-opening Adelaide 500 in South Australia with James Courtney and Scott Pye returning for their second year together as teammates.

Courtney – who swapped to car number 25 for the new season to celebrate Mobil’s 25th season with Walkinshaws in Supercars racing – was forced to fight back on Sunday from a lowly 14th on the grid to come home sixth after an entertaining scrap with Craig Lowndes.

And it proved to be Courtney who was first onto the podium, recording a brilliant second place in Race 1 after qualifying third in the Top 10 Shootout.

“It’s the start of a long journey, but it’s great that it’s begun so well,” said Courtney post-race.

“Typically, we go well here anyway, but the car was really strong, it was easy to drive, and it was extremely consistent and predictable. 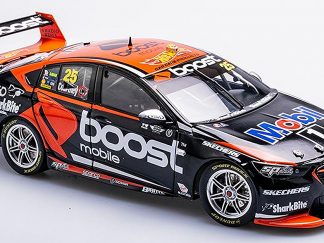