Holden Racing Team fans stopped in their tracks when HRT and Garth Tander unveiled their special Star Wars: The Force Awakens livery that would be raced by Tander and his co-driver Warren Luff at Bathurst. After Tander’s dark side of the force livery was revealed, all eyes then turned to what livery team mate James Courtney would be running with his co-driver Jack Perkins.

Around a week later on September 30, car 22 was revealed to special HRT guests which featured a lighter livery in contrast to Tander’s predominantly black challenger. While the car was launched with Courtney’s name on the window as lead driver, the big question on everyone’s lips was whether James would actually be able to drive the car at the mountain a week later due to his injuries sustained earlier in the season an Sydney Motorsport Park.

Unfortunately for James and HRT, he was unable to recover from his injuries in time with an announcement being made on the Wednesday prior to the event so Russell Ingall was again called up to the team to co-drive with Perkins stepping in to take the lead driver seat as they had at the previous Sandown 500 event.

Produced in die-cast, this model replicates the Bathurst launch livery and was delivered in advance for the event. 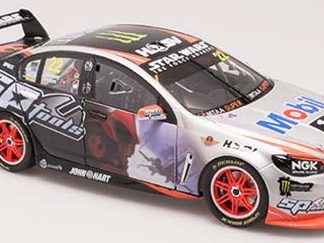