Biante Model Cars are very pleased to present the Holden VF Commodore Supercar in the iconic livery of the 1972 Bathurst Winning LJ XU1 Torana.
Believe it or not, it’s actually been almost 20 years since we released the 1972 Bathurst Winner in 1:18 scale. Although we’ve all seen many changes in that time, one thing always
holds true to us and our collectors. Our passion for this hobby and the heritage of Australian motorsport.
In recognition of this, and as part of our celebration of 20 years producing Australian model cars, we thought it was a great time to produce something special.
For our Holden fans, we’ve replicated and adapted the famous 28C Bathurst Winner livery onto the last Supercar based on a locally produced Holden. The VF Commodore.
We’ve tried to include as many little details in this version as possible to celebrate the original LJ release (and even make some corrections. Hint – the windscreen banner!), but also
honour the VF as the final book end to the Australian produced Commodore.
We’re quite proud of the final result and think the famous livery has wrapped itself around the VF remarkably well.
Featuring opening doors and bonnet, together with the usual excellent detailing and stunning paintwork, these models should not be missed.
Produced in die cast, this model will be set to an exclusive limited edition and will come with a numbered Certificate of Authenticity.
The 1:18 will form part of the Biante Peter Brock Collection. 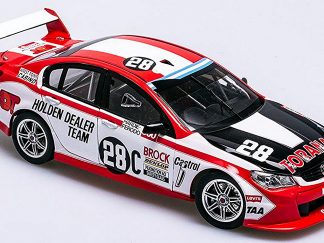