The Ford FGX Falcon Supercar in the famous livery of the 1971 Bathurst Winning XY GTHO.
Similar to the 1972 Bathurst Winner mentioned above, it’s been almost 20 years since we released the 1971 Bathurst Winner in 1:18 scale. It was October 1998 and marked the first time we released an Australian touring car model. It featured fully opening parts and most notably came with a certificate signed by Allan Moffat himself. Although it was never officially part of the Biante Allan Moffat Collection, it definitely takes an honourable position for most collectors. In recognition of this, and as part of our celebration of 20 years producing Australian model cars, we thought it was a perfect time to produce something special. For our Ford fans, we’ve replicated and adapted the stunning 65E Bathurst Winner livery onto the last Supercar based on a locally produced Ford. The FGX Falcon. We’ve tried to include as many little details in this version as possible to celebrate the original XY release (GT badging and stripes to name a few!) , but also honour the FGX as the final book end to the Australian produced Falcon. We were a little unsure at first whether the famous 65E livery would work with the FGX shape but we couldn’t be happier with how it turned out. It seems to work perfectly and we hope you’re just as impressed as we are. The 1:18 will feature the standard opening doors and bonnet as per our normal FGX Supercar range. Together with the usual excellent detailing and stunning paintwork, these models should not be missed. Produced in die cast, both of these models will be set to an exclusive limited edition based on order numbers and will come with a numbered Certificate of Authenticity. Additionally, we’re also very proud to announce that Allan Moffat will be signing the certificate for the 1:18 version and it will form part of the Biante Allan Moffat Collection. 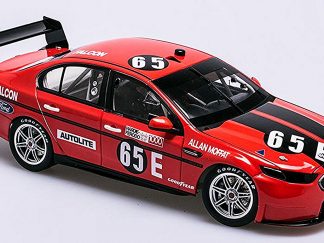