Holden VF Commodore Freightliner Racing driven by Tim Slade to take out his first race win at the 2016 Winton Supersprint.

When gun driver Fabian Coulthard announced his intentions to leave Freightliner Racing at the end of 2015, the number 14 Brad Jones Racing entry was widely considered to be one of the fastest seats available for the 2016 championship. After an interesting “silly season” with numerous driver’s names being thrown around as likely replacements, Tim Slade was eventually named the new driver of car 14 for 2016 after a couple of years with Supercheap Auto Racing.

As it seems to be the case for any sportsperson entering a new team environment, it appeared to take Slade a little time to settle in to the Brad Jones Racing team as was evident in the lead up to the Winton round with him sitting 14th in the championship. Slade’s previous best result at Winton was 3rd place in 2014 but his performance at the 2016 Supersprint left that old personal best as a distant memory.

The weekend at Winton started well enough with Slade winning his first Pole Position in qualifying on the Saturday which was backed up with an outstanding drive to take out Race 10. He backed up his perfect first win performance on the following day with a blistering drive to win Race 11 by 7 seconds after qualifying in 4th. It was an exceptional performance with Slade leaving Winton as the only driver to win 2 races up to that point in 2016.

This model will be produced in die cast with fully opening parts other than the boot, highly detailed interior, faithfully replicated engine bay and beautiful finishing. It will be a limited edition and will come with a numbered Certificate of Authenticity. 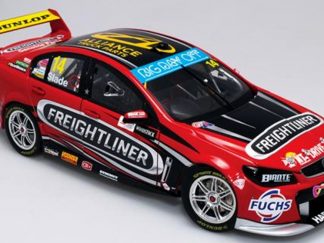