Lucas Dumbrell Motorsport entered the 2016 V8 Supercars Championship Season yet to record a race win in their six year history after entering their first season in 2010. Despite becoming the first rookie Bathurst 1000 winner in 30 years after his HRT co-drive with Garth Tander in 2011, Nick Percat was similarly starved of a race win given that was the last time he stood on the top step of a V8 Supercar podium. So, with race wins few and far between and given the small size of the privateer team you would be forgiven for thinking that they weren’t likely to win the first race of the 2016 season.

Probably the second biggest event behind Bathurst each year, the Clipsal 500 is a fan favourite and the events of the 2016 race certainly won’t be forgotten anytime soon. Teams, drivers and fans were graced with hot and sunny weather all weekend leading up to Sunday’s race at the Adelaide Parklands Circuit and then mother nature decided to throw a massive spanner in the works with torrential rain hitting the track just in time for the start of the race.

Simply put, the weather sent the race, pit lane and all proceedings into utter chaos!

After qualifying in 15th position, LDM made the race wining call to get the mandatory 140 litre fuel dump required for the race completed as quickly as possible to ensure Percat wouldn’t have to pit in the later stages of the race. Despite having a busted windscreen wiper in the worst possible conditions, Percat guided car 222 across the line to record the teams maiden V8 Supercar victory in front of his home crowd. 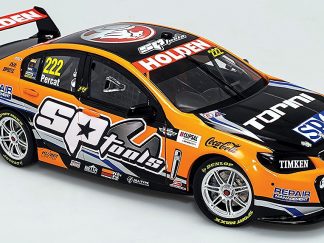