After a big 2015 V8 Supercar season celebrating the team’s 25 Year Anniversary in the sport, Holden Racing Team unveiled a perfect livery to end the years celebrations. Just prior to the final event of the season, the Coates Hire Sydney 500, HRT pulled the covers off their final livery for the year which would pay a special tribute to the teams rich history and their 230 strong nation wide dealer network. The aggressive livery was designed around the team’s 25 Year Anniversary logo and incorporated the names of all of the Holden Dealers from around the country as a special thank you and recognition of their support to Holden and HRT over the past 25 years.

While the final round of the year wasn’t an overly successful outing for the team other than James Courtney securing pole in the top-ten shoot out for the final race, HRT’s 25th year was certainly one to be remembered for its many striking liveries, celebrations and moments. The 2015 season saw the team claim 2 race wins, 3 pole positions, a 3rd place at the Bathurst 1000, winning the Pirtek Endurance Cup and ultimately 3rd position overall in the teams championship.

Mish M.
I have received the products (Mad Max models) today. I liked the products very much. Thank you for the careful packing and quick transaction.
Yukiya
Japan
I just wanted to let you know that I received Order #1687 for my 3- 1:43 car order and couldn’t be more pleased with both the cars and their boxes. Thank you very much. Have a g’day down under. 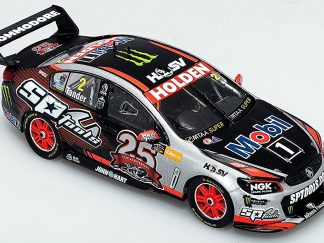