The 1984 Bathurst 1000 was celebrated as ‘The Last of the Big Bangers’, referring to the Group C Touring Cars, which were competing at Bathurst for the last time.

The No.6 Roadways Racing Holden VK Commodore driven by Allan Grice and Steve Harrington, had a great start to their weekend qualifying in 4th position on the starting grid for the Big Race.

THe Grice/Harrington VK Commodore started the race well and was running in the top 4 in the early stages of the race, evenutally taking the race lead through the Cutting from the Peter Brock/Larry Perkins Holden VK Commodore after they had taken their first pit stop.

However, this was short lived as Allan Grice had to pit on the next lap as he handed over the driving dutires to co-driver Steven Harrington.

On lap 55 tradgedy struck as Harrington lost control of the car and hit the wall on the exit to Hell Corner with the car suffering heavy damage to the front end. After extensive repairs in the pits they were able to get the car back out on the track with Grice behind the wheel but the lingering effects of the damage proved too much and they were forced to retire from the race on lap 70, registering a DNF for their 1984 Bathurst 1000 campaign. 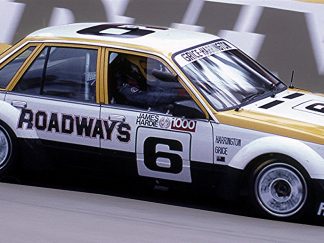