After a character building first season which saw him take out the 2021 Indy 500 and IndyCar Rookie of the Year honours, Scott McLaughlin can now add an IndyCar pole and race win to his growing list of motorsport accomplishments, ticking off both in one weekend after he started his 2022 season in perfect style at the first race of the year on the streets of St. Petersburg.
With a goal of a ‘solid’ top 7 finish the main aim for the weekend in the build up to the Grand Prix, expectations quickly changed as McLaughlin secured a sensational breakthrough pole which lit up social media in excitement, especially at home in Australia and New Zealand.
Come race day McLaughlin didn’t disappoint. He successfully navigated the pressure of his first rolling start from pole and largely controlled the race with car 3 the effective front-runner all day. Slow traffic created a nail biting battle in the closing stages of the race with reigning series champion Alex Palou, but ultimately the race was McLaughlin’s as he held his nerve to cross the finish line in first place.
It was an incredibly proud moment for the driver, his team, his family and his supporters across Australia and New Zealand, with McLaughlin thanking all of them in victory lane.
We’re very proud to announce this die-cast version of the Team Penske DEX Imaging IndyCar driven by McLaughlin to secure his first career IndyCar pole position and race win at the 2022 Firestone Grand Prix of St Petersburg.
Presented on Firestone alternate tyres, visually differentiated by red sidewalls, this model will be produced in a limited edition and will come with a Certificate of Authenticity signed by McLaughlin.
A figurine of McLaughlin celebrating the win will also be included making this an extra special collectable for fans. 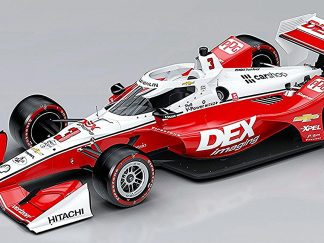