The 1973 HQ Monaro was described as the “Pursuit Special” in it’s most famous Australian Film Franchise Mad Max, although the only real external indication of it being a Main Force Patrol car is the “MFP” logo on the lower rear quarter panels of the car and the faint very same logo outline painted on the boot, along with the in-car blue siren and lights with the standard MFP radio.

The HQ Monaro is a classic for young and old.

The first time it made it’s appearance in TV was in 1979, before this it was originally purchased off of an elderly couple. The vehicle needed to appear damaged for its role in it’s movie so the crew drove it recklessly around Melbourne, grinding it against guard rails and other stationary objects.

The HQ Monaro’s metal life came to a halt during filming when the crew removed the engine, replaced it with a rocket and crashed the vehicle.

Image for Reference ONLY 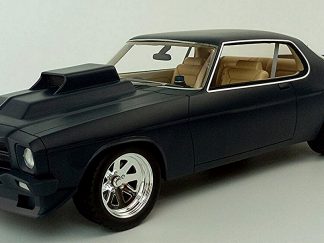