The Monster Mustang was fast all weekend at the 2020 Bathurst 1000. Sharing driving duties with Will Davison, both driver’s practice times were strong across the weekend and Waters ultimately recorded the 4th fastest time in qualifying to book a place in the coveted Top 10 Shootout.
Come shootout time, Waters put in an absolute monster lap – pun intended – to rag doll his Mustang around the mountain to record a blistering time of 2:03.5592s and set himself up as the man, and machine, to beat with 3 exceptional drivers left to record their laps. Those 3 drivers were Scott McLaughlin, Shane van Gisbergen and Lee Holdsworth and none could better the time set by Waters.
“Man, I’m so pumped,” exclaimed Waters on his cool down lap.
“That was absolutely awesome. So much fun. Made a bit of a mistake at the Dipper, but who cares? I had fun doing that. I had no idea man, I just knew the markers I had to hit, and I went and did it. I knew we were going to go a fair bit quicker like we did in practice. I gave it everything, hopefully it’s enough, man. I’m surprised I stopped the thing, it was bloody red on my dash. I was turning it in, three-wheeled it and got out.”
As Bathurst history shows however, starting from Pole for The Great Race doesn’t necessarily guarantee a win on race day. Both Waters and Davison put in faultless driving performances across the 161 lap epic but just fell short, finishing in 2nd place on the day. 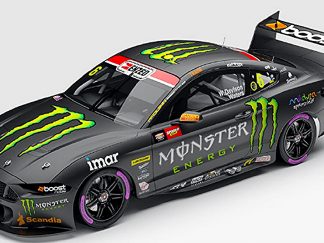