The Shell V-Power Racing Team 2019 Season Review is an impressive limited edition collector’s book for fans of the iconic Ford team competing in the Virgin Australia Supercars Championship. Without a shadow of a doubt, 2019 was an incredibly successful season for the team, winning the Bathurst 1000 along with both the Drivers and Teams Championships.
Superstar driver Scott McLaughlin lead the way, breaking numerous records across the year to finish as not only a back to back champion but also as the driver to claim the most wins in a season in ATCC / Supercars history. Of course, a team is only good as both its drivers and Fabian Coulthard was also a powerful force in 2019 adding numerous race wins, podiums and crucially stepping up in the final round of the season to help secure the prized Teams Championship.
Beautifully designed and presented, this soft cover book includes everything from the team’s 2019 season covered over 192 pages. A vast array of images from across the year, day by day recaps from each race weekend, full results for each session, driver quotes from Fabian Coulthard, Scott McLaughlin, Tony D’Alberto and Alex Premat, year statistics and more are featured.
All of Scott McLaughlin and Fabian Coulthard’s 2019 poles and wins are included backed up with impressive imagery along with expanded sections dedicated to covering the big endurance races at Sandown, Bathurst, Gold Coast as well as the final championship winning Newcastle 500 round.
Other notable highlights include a foreword from team co-owner and racing legend Dick Johnson along with an introduction from Team Principal Dr. Ryan Story.
This book has been printed in a one-off limited edition print run in Australia using green printing methods. Each edition will come in protective plastic wrap and will be shipped in a sturdy mailing box to ensure it arrives to you in pristine condition. 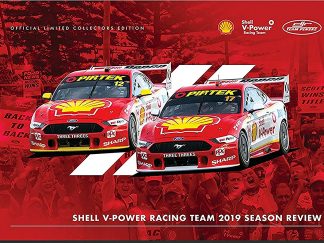