After a successful 4-year stint with Brad Jones Racing which earned him a number of race wins and podiums, Fabian Coulthard joined DJR Team Penske in 2016 as a big name recruit for the team.

While the 2016 season ultimately proved to be a development year for the team and Coulthard coming up to speed with the FGX, there were still glimpses of the success that would eventually come with a pole at Adelaide and his first podium for the team at Phillip Island in the Falcon featuring this iconic blue Pirtek livery that looks absolutely magnificent.

This model is produced in high quality die-cast with detailed interior and opening parts. It will be produced in a limited edition with a numbered Certificate of Authenticity. 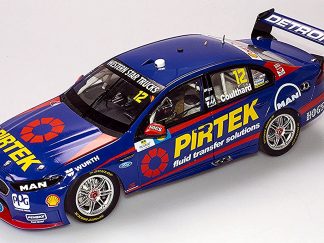