McLaughlin’s 2020 win sealed a ‘Three-Peat’ of consecutive driver’s championships for both him and the team in what is the 10th drivers championship for DJR/DJR Team Penske in the 40th Anniversary for the team.

In claiming such a historic milestone, McLaughlin became the 1st Ford driver to win three straight championships since Ian Geoghegan won four in a row from 1966-1969 and only the 4th driver in history to claim the feat, joining Mark Skaife, Jamie Whincup and Geoghegan in the record books.

Printed on 250gsm matte paper stock using offset print technology, it measures a large 1000 X 590mm and includes Pantone silver metallic ink for a special finish. It’s a remarkable large format print that features the famous #17 Ford FGX Falcon McLaughlin drove to secure his maiden championship in 2018 along with the Ford Mustang GT’s he drove to then claim the 2019 and 2020 championships to secure the Three-Peat. 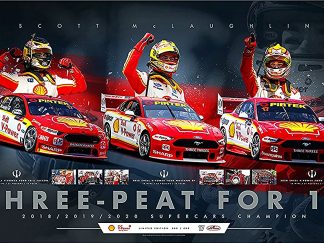