After eventually switching teams and joining Tickford Racing in 2020 in a well documented set of unusual circumstances, James Courtney continued on with the team for the 2021 Supercars Championship in his striking Boost Mobile backed Mustang.
A significant change to the traditional start of the Supercars calendar for various reasons saw the opening round of the 2021 season held at Bathurst for the Mt Panorama 500, this season model will be based on that round.
The 2010 Champion has enjoyed solid results in another COVID-19 interrupted 2021 season, featuring in the top ten on a regular basis.
The combination of a former champion and a major sponsor who is a known mover and shaker in Boost Mobile combine to make this a fantastic release.

Pip
NZ
I have received the products (Mad Max models) today. I liked the products very much. Thank you for the careful packing and quick transaction.
Yukiya
Japan
I just wanted to let you know that I received Order #1687 for my 3- 1:43 car order and couldn’t be more pleased with both the cars and their boxes. Thank you very much. Have a g’day down under. 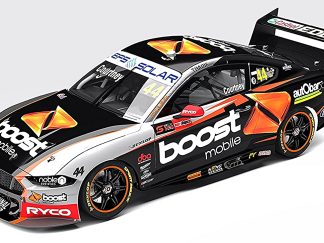