Limited edition illustrated print featuring the iconic Greens’-Tuf Ford Falcon XE driven by Dick Johnson in the 1983 James Hardie 1000 Hardie’s Heroes top ten shootout.
A hall of fame driver with 3 Bathurst 1000 wins and 5 Australian Touring Car Championship titles next to his name, there is no question of Dick Johnson’s calibre as a race car driver. But it’s perhaps that winning pedigree combined with his likeable character and some of the crashes he sustained during his career (particularly at Bathurst) and the way he bounced back from those moments that have made him a legendary Australian folk hero.
One of those moments came at Bathurst in 1983. A previous Bathurst winner and reigning touring car champion, Johnson along with co-driver Kevin Bartlett rolled into Bathurst that year with an amazing looking car in Greens’-Tuf that was seriously fast. Johnson’s qualifying times were strong to have the car in 2nd place on the grid provisionally despite using older tyres. They were easily one of the favourites to win the Great Race.
Then came that fateful lap in the Hardie’s Heroes to determine the first 10 starting positions of the race.
Johnson started his lap and was looking a real possibility to be starting the race on pole but never got to finish. A slide in the rear at the exit of Forrest’s Elbow saw the big Falcon clip the wall and drag the right front wheel into a concrete filled tyre stack, breaking the steering and sending Greens’-Tuf flying into the trees.
The car was totaled, thankfully Johnson wasn’t and exited the wreck un-injured.
Ultimately Johnson and the team managed to source a replacement XE and took to re-fitting it with the race engine from the wrecked Hardie’s Heroes Falcon along with other bits and pieces and re-painting it in the Greens’-Tuf colour scheme overnight. It didn’t look as finely polished as the Hardie’s Heroes version but the ‘morning after car’ was a massive achievement in team work and the car was rolled out to the grid on race morning – with the paint still drying – to start from 10th on the grid. Unfortunately a fairytale win wasn’t to be, the hastily built car had multiple issues during the race and ultimately didn’t finish, completing 61 laps of the race.
This illustrated print features the Hardie’s Heroes Greens’-Tuf XE prior to its trip through the trees in a quality and style never before seen and celebrates one of the most iconic cars in Bathurst 1000 and Dick Johnson Racing history.
Featuring the artwork of Australian designer / illustrator Tristan Groves, this impressive vector illustrated print measures 594mm X 841mm and will be printed on 250gsm matte paper using offset print technology in an exclusive limited edition, with each copy individually numbered and signed by the artist. 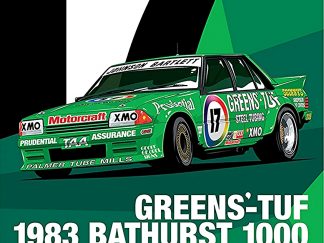