It was one of the biggest things to happen in Australian motorsport when legendary Ford team Dick Johnson Racing joined forces with the powerhouse of American motorsport, Team Penske to form DJR Team Penske.
In their first full time season competing in the 2015 Supercars Championship, the team employed a rolling sponsorship livery which was essentially the same base design used on the exterior of the car across the whole year which would be updated with the various colour schemes and branding of the different major sponsor for each round where it was needed.
This changeable livery design presented the team with the opportunity to create their own DJR Team Penske branded Falcon which was used on various occasions, particularly at ride days and for promotional purposes across the season.
The black and white livery with hints of red really looked neat and impressive. Combined with the DJR Team Penske logo adorning the sides and bonnet along with the famous number 17 and Scott Pye and Marcos Ambrose’s names on the windows, it was unmistakable.
It’s a unique model for fans of this team or drivers that represents the early days of DJR Team Penske which would quickly become a powerhouse in Supercars, especially between 2017-2020 before Team Penske’s exit from the category and is one that shouldn’t be missed.
This model is scheduled to be produced in sealed body die-cast with clear windows, detailed interior and will be presented in a clear acrylic display case with a numbered backing board which acts as the Certificate of Authenticity. 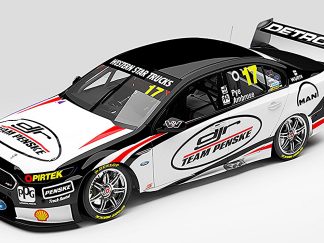