Erebus Penrite Racing Magic Moments limited edition print range which has been designed to capture key moments and milestones across the history of the team. A fan favourite team with David Reynolds in the seat and Betty at the helm, Erebus Motorsport proved that it’s not always the ‘big’ teams who win The Great Race in 2017. Partnered with co-driver Luke Youlden, Reynolds was on the pace all weekend in his Penrite backed Holden VF Commodore and started the race on the front row in 2nd position. Come Sunday morning, the nation’s eyes were on Mount Panorama with the #9 Commodore amongst the front-runners all day despite poor weather and a wet track. It was an action packed finish to the race. With just 16 laps to the checkered flag, Reynolds sat fourth on the final restart and capitalised on other driver errors to launch himself into the top spot to take out the Peter Brock Trophy and mantel of being the 2017 Supercheap Auto Bathurst 1000 winners – the first Bathurst 1000 victory for both drivers and the team.

This is a brilliant print capturing this magic moment for the team featuring a range of amazing graphic imagery and details printed with offset print technology on 250gsm matte paper stock.

Produced in an individually numbered limited edition of 300 copies, this is another impressive collectors print that is perfect for fans of this iconic race team. 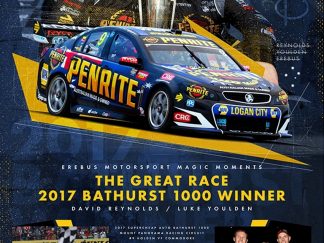