The fact that Glenn Seton’s Ford team won the 1993 Sandown 500 in Melbourne was no real surprise, but it was the fact that it was the team’s second entry that claimed the chequered flag – rather than the lead entry – really was a major surprise. Aussie international Geoff Brabham and evergreen Tasmania David ‘Skippy’ Parsons were signed to support the team’s main car, but on a day where virtually all of their rivals had problems, they came sailing home to take a comfortable victory. In fact they finished a full three laps clear of the privateer Ampol Max 3 Commodore entry of Bob Jones and Greg Crick!

It had been a dominant season for the PJ-backed Fords in 1993; Seton and teammate Alan Jones had finished 1-2 in the Shell Australian Touring Car Championship for the Melbourne-based team and its pair of blue Ford Falcon EB V8s were certainly the pacesetters for most of the sprint race season. The two were paired up in the team’s #30 entry for the Sandown endurance classic in 1993, which attracted a solid entry list amid the beginning of the five-litre V8 rulebook that would eventually become V8 Supercars and now Supercars racing.

The Gibson Motorsport Commodores and the B&H and Diet-Coke BMW M3s decided to skip the race and focus on private testing, but the field was otherwise still solid and a relevant and interesting litmus test for that Tooheys 1000 at Mount Panorama a few weeks later.

Seton’s two Falcons were up against the similar Shell Ford of Dick Johnson, John Bowe and rookie Cameron McConville; the Holden Racing Team and Advantage Racing each entered two Commodores, Bob Forbes’ GIO team and Larry Perkins’ Castrol squad arrived with a car each and a smattering of privateers made for a healthy line-up for the 500-kilometre, 161 lap classic.

American-based Brabham (who had earlier in 1993 won the Le Mans 24 Hour outright for Peugeot’s factory team and not raced in Australia in 13 years to that point) and Parsons were teamed in Seton’s championship-winning car, racing under the #35 for the weekend.

They qualified eighth on the grid, 1.1-seconds off the pace set by Tomas Mezera aboard the Holden Racing Team’s lead VP Commodore.

While many of the front-runners engaged in early race bravado, Brabham simply stayed out of trouble in the background as light rain made the track a slippery place to be on occasion. Approaching three-quarter race distance the Seton team had worked itself into the perfect situation, the lead #30 Seton/Jones car out front with the Brabham/Parsons comfortably in second spot.

The team’s major opposition had fallen – or been delayed enough to be out of contention to win – throughout the day, but then misfortune hit the lead car. A split diff housing was terminal, handing the lead to Brabham. A Nissan IMSA driver regularly in the United States at the time, the one-time IndyCar ace had a two lap lead over the chasing Holden Racing Team Commodore of Brad Jones/Tomas Mezera/Allan Grice, which then suffered oil pump failure to hand second place to the Quix/Advantage car of Troy Dunstan and Steve Harrington. But it too had engine problems and limped into the pits pouring with smoke, handing the place to the Ampol car of Bob Jones and Greg Crick, which they held to the end.

While their chasers fell like flies, Brabham and Parsons held solid and scored Seton’s team’s second Sandown 500 win (the first coming in 1990 with Seton himself and George Fury in a Sierra). Only 12 of the 23 starters made it to the finish in the Sandown 500 on Sunday September 12, 1993, a day where Ford ruled supreme on a classic Aussie touring car battlefield. 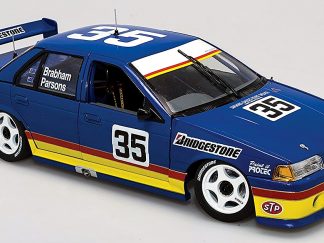