Dubbed the ‘Billion Dollar Baby’ when it was first launched in 2006, the Holden VE Commodore was an executive car that arguably represented Holden in Australia at the absolute peak of its powers.

Development on the new Commodore began in 1999 and over the course of 7 years of design, engineering and testing, over 1 billion Australian Dollars was spent to make it the largest and most expensive Holden ever developed.

Couple that expenditure with the 3.4 million kilometres of testing carried out on the project, the new VE was an Australian designed and developed model that would not only replace the popular outgoing VZ Commodore series for the brand, but go on to win much acclaim world wide and sell over half a million units in its various forms both domestically and internationally during a lifespan ranging from 2006 to 2013.

The VE was not only a winner on the road but on the track too. The foundations of the VE helped Holden motorsport claim 103 V8 Supercar race wins, including multiple Bathurst 1000 victories and series championships to have the model sitting in 2nd place on the all time winning model list behind its eventual VF Commodore replacement.

This is a car that was not only beautifully designed, but commands a tremendous amount of respect and will in time, likely be viewed as an iconic piece of Australian motoring history, especially now the Holden brand has sadly been retired.

The high end sports variant of the VE Commodore, the SS V-Series in Ignition Metallic in model form for the first time which is scheduled to be produced in die-cast with fully opening parts and high detail.  This model will be produced in an exclusive limited edition with an individually numbered Certificate of Authenticity. 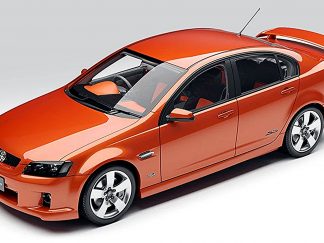