The Sandown 500 Retro Round has been a fan-favourite event for Supercars fans in recent years with teams running fantastic retro-inspired liveries in a celebration of Australia’s rich history of motorsport. This rich history was perfectly captured by Supercheap Auto Racing’s livery for the 2019 event where they paid tribute to one of the most famous race cars to have ever raced in Australia, Allan Moffat’s iconic red Trans-Am Coca-Cola Mustang.
Making the livery even more special was having Moffat’s son James in the racing seat as a co-driver with Chaz Mostert in the 2019 spec Mustang GT Supercar.
Given they were paying tribute to such an iconic car that won a lot of races, a podium would have been the bare minimum of expectations for the team coming into the 500 race. Despite a lacklustre qualifying performance by their standards, the duo still managed to have a great race to come home in 2nd place at the end of
the 161 laps. 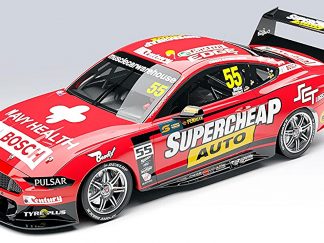