If anyone was a big winner as a result of the 2020 COVID-19 Pandemic, it was James Courtney.

The 2010 Champion found himself without a full time drive when he and the newly formed Team Sydney opted to part ways after the season opening Adelaide 500. His lucky break arrived when Milwaukee Racing unfortunately folded and left the door open for team owner Peter Adderton to swoop in, pick up the pieces and put Courtney in the driver’s seat of the newly formed Boost Mobile Racing Ford Mustang.

Dressed in a striking silver and black livery, the car looked amazing and Courtney’s results were reasonably consistent across the year given the Mustang and team were all new surroundings for the driver. A podium finish for the team went begging on the very last turn of the final lap during Race 11 at Sydney Motorsport Park when Courtney, on ageing tyres, couldn’t hold off a rampaging Scott McLaughlin but the disappointment was short lived with Courtney claiming a 2nd place finish at the following round at Darwin’s Hidden Valley.

This model will be produced in high quality sealed body die-cast with clear windows, detailed interior and will be presented in a clear display case in a limited edition with an individually numbered backing board which acts as the Certificate of Authenticity. 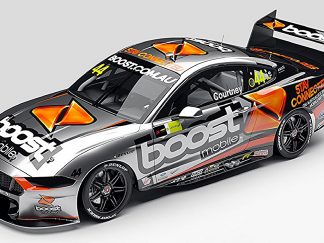