No one could deny that Shell V-Power Racing Team were the dominant force across much of the 2019 Virgin Australia Supercars Championship Season. In their first season running their new Ford Mustang GT’s, Scott McLaughlin was simply in a league of his own in the #17 Mustang, breaking numerous records and winning both the Bathurst 1000 and drivers Championship while Fabian Coulthard in car #12 was the perfect team mate adding multiple race wins and podiums across the year to bank valuable points in the Teams Championship battle.
As has been the case in recent seasons, the Teams Championship battle came down to the wire at the Coates Hire Newcastle 500 against rivals Triple Eight Race Engineering and it was strong performances by both drivers, particularly Coulthard with two podium finishes who ultimately was the highest ranked driver for the round, which saw them claim the 2019 title and re-gain the #1 garage for the 2020 season.
The team finished the year with a phenomenal record of 20 race wins, 33 podiums and 16 poles.

With both cars dressed in the Coates Hire Newcastle 500 livery, don’t miss this amazing 1:43 scale 2019 Teams Champion Twinset which is scheduled to be produced by Authentic Collectables. Each model will be produced in high quality sealed body die-cast with clear windows, detailed interior and will be presented in a clear acrylic display case featuring presentation finishing in an exclusive limited edition with an individually numbered base. 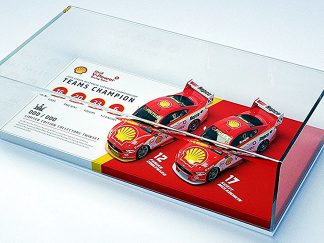