After the heart-break of missing out on the 2017 Championship by the narrowest of margins in unbelievable circumstances, Scott McLaughlin and Shell V-Power Racing Team haven’t looked back and have been a dominant force in Supercars from that point on. An unbelievable season racing an ageing Ford FGX Falcon in 2018 saw McLaughlin win 9 races, 21 podiums and 13 poles on his way to claiming his maiden championship win and to give the Ford Falcon a fitting finale in Australia.
If winning the 2018 championship was a road to redemption for McLaughlin and the team then his 2019 championship win was a road to broken records. Racing the brand new Mustang GT, numerous records were broken on the way to claiming 18 wins (including a Bathurst 1000 victory), 22 podiums and 15 poles to ultimately  secure the 2019 Championship with a round in hand.
With both McLaughlin’s Ford FGX Falcon and Mustang GT models replicated in their championship-winning Coates Hire Newcastle 500 liveries, this amazing 1:43 scale 2019 Back-To-Back Champion Twinset is scheduled to be produced by Authentic Collectables with each model to be produced in high quality sealed body die-cast with clear windows and detailed interiors. Both models will come in a clear acrylic display case featuring presentation finishing in an exclusive limited edition with an individually numbered base. 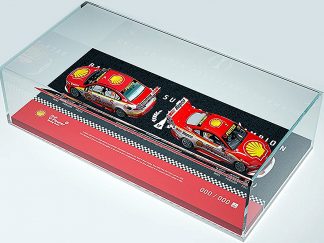